(Chelsea Update would like to thank Kristine Collins for the information and photo in this story.)

Chelsea’s Timbertown now has a “Gaga Pit,” courtesy of Chelsea Girl Scout Troop #41095 and volunteers from the community.

Ga-ga (literally ‘touch-touch’ in Hebrew) is a variant of dodgeball that is played with one ball. (Other names for this game include Israeli dodgeball, octo-ball and panda ball.)

The game combines dodging, striking, running, and jumping. The object of the game is to be the last person standing. Players hit the ball at each other with their hands, and are eliminated if the ball strikes them on or below the knee.

The game can be played by a group of individual players or as teams. There can even be one-on-one matches. Rules, ball types, pit surfaces, and pit sizes can vary widely at different venues.

Where did the idea come from?

As any sixth-grader in the Chelsea School District who attended the grade’s annual camp can tell you – gaga is awesome. When the doors open for breakfast at the 6th grade camp in Howell, the Beach Middle School students charge straight to the gaga pits and jump inside – boys and girls locked in the excitement of the game.

“Ga-ga, ga-ga,” they chant as the ball is dropped in the center of the pit and the game of gaga begins. Other classmates quickly gather around to cheer and wait their chance to join in.

The old, but new-to-some-game of gaga – what some call a kinder and gentler form of dodgeball – is being chosen over traditional games on a number of playgrounds these days. And parents, educators, camp counselors and other grown-ups – and kids, too – say the spread of gaga fever is a good thing.

They call the game of gaga “the great playground equalizer.” It doesn’t require a strong throwing arm, fast legs, or superb hand-eye coordination. Almost anybody can play.

Kids have been playing Gaga for an estimated 40 to 50 years. Some say the game started in Australia, others say its roots are in Israel. Today, it has taken root in the U.S. at schools, party centers, summer camps and on cruise ships.

Here’s an overview of how it’s played

Gaga’s rules seem to vary, depending on who is playing, but the gist of it is this: The pit, or playing area, is filled with kids and an official, standing outside the pit. The official bounces a soft rubber ball into their midst.

With the ball’s second bounce, the players scurry around, trying to use flat, open hands to roll the ball so it makes contact with other players – usually just from the knee down –  as they all try to avoid being hit by the rolling ball. If the ball touches a player’s designated body area, that person is “out” and must leave the pit.

If a ball is mistakenly launched out of the pit, the last person to touch it is out.

Played in a large fenced-in area (usually an octagon or hexagon), the pit generally consists of flat walls atop a smooth dirt, turf, or sand surface. The ball can vary in size and form, generally ranging from a foam dodgeball to a rubber kickball.

Building the pit at Timbertown, which can be used by everyone in community, was part of the girls’ Silver Award—the highest award a Cadette Girl Scout can earn. And, the troop came up with six inspirational words that are engraved on each side of the pit – Hope, Dream, Character, Inspire, Confidence and Courage. 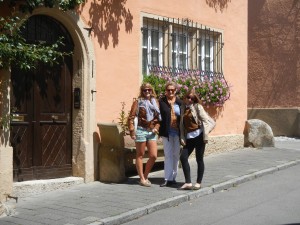 Get involved in the Home Town Holiday festival planning 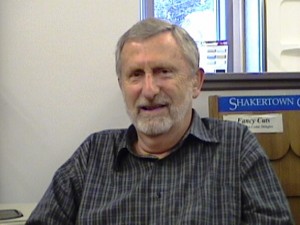 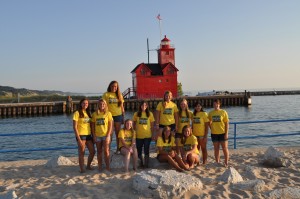 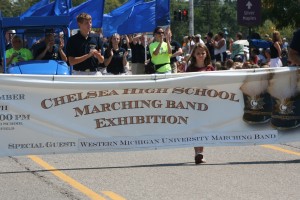 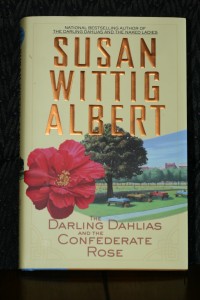 Cozy Corner returns: The Darling Dahlias and the Confederate Rose