If you weren’t driving by too fast, you might have been able to read the “Adopt-A-Highway” volunteer written on their vests.

In fact, you probably know some of them – they’re your neighbors and members of the Chelsea Kiwanis – folks who have been faithfully participating in the state’s Adopt-A-Highway program.

For the last 20 years, Chelsea Kiwanis members have been part of almost 3,200 volunteer groups that clean up litter along more than 7,200 miles of Michigan highway. Members of the Chelsea Rod and Gun Club Auxiliary have also been participating for just as long, according to state records.

On July 19, three members of the Chelsea Kiwanis Club – Bob Milbrodt, Jim Randolph and Tom Ritter – were out on the shoulder of I-94 east between Freer and Pierce roads for the second time this year doing their part to beautify the highway, while a fourth Kiwanian, Jack Kehoe, was their designated driver.

The men met at the Park and Ride lot on M-52 before heading out to complete the first 1-mile section of the 6 miles, which the club has adopted. They work 3 miles on each side of the highway in their designated stretch.

When asked about some of the more unusual items they’ve found, the three volunteers said they’ve found dentures and lots of golf balls (thanks to the proximity of Pierce Lake Golf Course) to their section of the highway.

Randolph said he found 30 one-ounce vanilla vodka bottles, and the men decided that someone had a daily ritual of having a drink, then tossed the evidence before they arrived at home.

The men have also found numerous dead animals – including snakes, deer and turtles.

“We came upon eight cows lined up along the fence separating us.  They seemed a rapt audience for our roadside pickup performance,” Milbrodt said, “After a few minutes, though, they all left together to another corner of their pasture. They joined us again a few minutes later, but did not face us as they did before,” he said, adding, “Apparently, our novelty had worn off.”

Also memorable was a $20 bill, cell phones, out-of-state license plates — even a wallet with a driver’s license in it, which was turned into the Chelsea Police Department.

Some of the more common items are retreads from tires, returnable soda cans and bottles that are kept for the deposit money, and many plastic bottles filled with urine.

It seems, Ritter said, that some truck drivers don’t stop when nature calls, they use plastic bottles inside their cabs, and then toss them out the window.

The Adopt-A-Highway is a Michigan Department of Transportation (MDOT) program, which began in 1990.

“They (the volunteers) take great pride in their communities, and help MDOT concentrate its limited resources on repairing roads and bridges,” he said.

According to state statistics, last year, the Adopt-A-Highway volunteers collected more than 75,000 bags of trash and saved fellow taxpayers $1.5 million in cleanup costs.

The Kiwanis Club members said that the state’s bottle deposit law has helped to cut down on the amount of bottle and cans they find.

Civic groups, businesses and families put together crews of at least three members who are at least 12 years old and signs with the adoptive group’s names are erected along that portion of the highway.

The state selects three dates each year for the clean-up and they took place in April, July and the final event will take place from Sept. 22 to 30.

The Kiwanis Club would love to have more hands on deck for the September clean-up effort and hopes that community members 12 years and older will contact them and participate in this beautification effort.

Who knows, you might even find a wooden drum stick or a wayward U-M flag, as Randolph did this year. He kept the drum stick.

At the Market: Saturday, Sept. 8 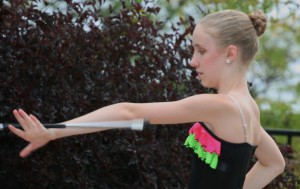 Senior Center offers pilot program for those without transportation 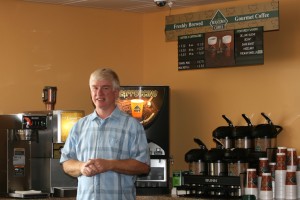