(Chelsea Update would like to thank head lacrosse coach Joe Koengeter for the information and Mark Bogarin for the photos in this story.)

The great weather and large crowd helped out on Friday night, May 17, as the Chelsea Lacrosse Team won its first playoff
game, downing Temperance Bedford, 10-2 at home.

“It was a great atmosphere during the game as the team feed off of the home crowd,” said Head Coach Joe Koengeter.
This was the first time Chelsea had hosted a playoff game and it was great to get a win, he said.

There were a number of players brought up from JV for the playoffs and every one of them got into the game. 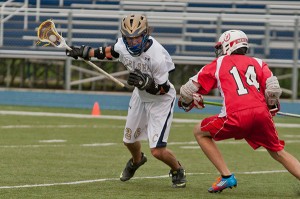 “The kids are brought up for the experience and to get ready for next year, it is always great when you can enhance that experience for them and get them playing time in the playoff game as well,” he said.

This was the first round of the Division 2 state playoffs and Chelsea travels to Tecumseh on Thursday for the team’s next game.

Chelsea scored four goals in the second, two in the third and four in the fourth quarter.

Devon Conti and Ryan Hein also had one goal each.