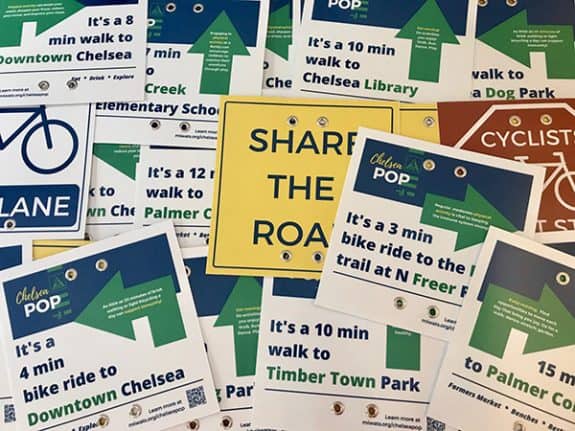 (Chelsea Update would like to thank Suzann Flowers for the information in this story.)

The Chelsea Pop project team recently announced that the project will be extended until Oct. 9.

Chelsea POP is a 30-day demonstration project that was deployed in September along Freer Road, Railroad, McKinley and Dewey street through a partnership of the City of Chelsea, Washtenaw Area Transportation Study (WATS) and Saint Joseph Mercy Health System.

The project is being extended by two weeks due to the Freer Road bike lanes installation during the week of Sept.18.

Suzann Flowers, transportation planner with the Washtenaw Area Transportation Study, “expressed how exciting it is to see all the project elements on the ground. We want to extend a big thank you to the Chelsea Department of Public Works team for their hard work and assistance with the deployment of the various project elements.”

A final project survey will be released the week of Sept. 28, to gauge the impression of the Chelsea Pop project.

More information can be found at the project website at www.miwats.org/chelseapop.