On the second Saturday of each month, volunteers from the Chelsea First United Methodist Church cook 55 dozen eggs, 40 pounds of sausage, 30 pounds of bacon and 55 pounds of hash browns for a free community breakfast.

“This is a wonderful service,” said Sylvan Township resident Rod Branham. “We’ve come many times and even though it’s free, don’t be afraid to send a donation.”

Pastor Joy Barrett said the church has been providing the meal for about three years and the event averages more than 225 people per month.

“It has steadily increased and takes about 50 volunteers to pull it off,” Barrett said.

There’s a core group of people who have been part of the breakfast from the start, she said, but people from 7 to 90 years old volunteer for the myriad of  jobs to keep the meal running smoothly each month.

“No one has a lock on the jobs,” Barrett said, “And there is someone to help people learn new ones if they haven’t done them before.”

Jessica Ligi, 13, is one of those volunteers. She was helping to clear tables at the February breakfast.

“I like seeing all the new people at the breakfast,” she said when asked why she chose to help. And, she said, “I highly recommend the apple sauce; it’s my favorite.”

Barrett called Todd Hubbard, a member of the mission team, “the glue that holds it (the breakfast) together.” 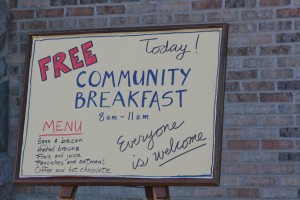 He’s the man who keeps the meal train on its tracks.

Hubbard said there’s a group who sets up on Friday night and he’s at the church at about 6:20 a.m. Saturday morning to get the preparations and cooking underway.

“It’s a place for the community to gather,” he said, adding that previously, perhaps 70 percent of those attending the breakfast also attended the church. Today, more and more people from outside the church stop by and enjoy the meal.

He recommends arriving between 8-10 a.m. because sometimes they run out of some items before 11 a.m.

Everything is donated  — from the food to the funds to the volunteer efforts.

And in addition to the monthly second Saturday meal, about 55 families receive free household products from the church library. Any one in need may receive laundry detergent, dish soap, toilet paper, boxes of tissues, paper towels or feminine hygiene products. 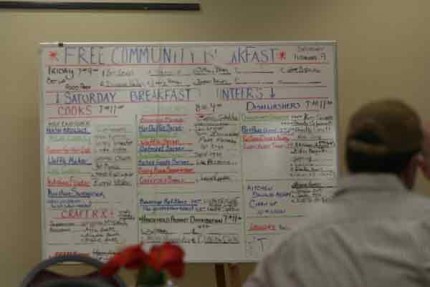 May 12: Asparagus, Spring Veggies at the Wednesday Farmers Market

May 11: What’s on the Lyndon Township Board Meeting Agenda

This week on Around Town with Linda: Nicole Tweedie