Two veterans were honored by the American Legion Post 31 of Chelsea on Thursday night, Sept. 6 — one as the first recipient of a new volunteerism award; the other as the person after which the award is named.

Donald “Digger” O’Dell — known for his effervescent smile and long history of volunteerism for the post — now has an award bearing his name, which will be given annually to a legion member who emulates his devotion to the post and fellow veterans.

“To celebrate those volunteers, we have developed an award and there’s a past commander here, and of the veteran’s council, who has worked at the hospital and has taken care of flags at the cemetery. He always has a smile on his face and he’s always totally neighborly and friendly,” Zatkovich said, adding, “Marine Corporal Donald O’Dell, front and center.”

O’Dell’s photo rests in the center of the plaque that will hang inside the post and future recipient’s names will be engraved on it.

The first winner of the “Digger O’Dell” Award was Doug Helek, a tireless volunteer who quietly takes care of many of the jobs that “many people don’t know about or don’t see,” Zatkovich said.

“He’s spent his own money on tables and chairs and a refrigerator and he built the seawall out front,” Zatkovich said. “He’s involved in the fishing derby; he quietly keeps the post and the bathrooms clean.”

Each year, the post holds an appreciation dinner at the end of summer (followed by a ceremonial flag-burning ceremony), and the award will be given out annually at this special event. 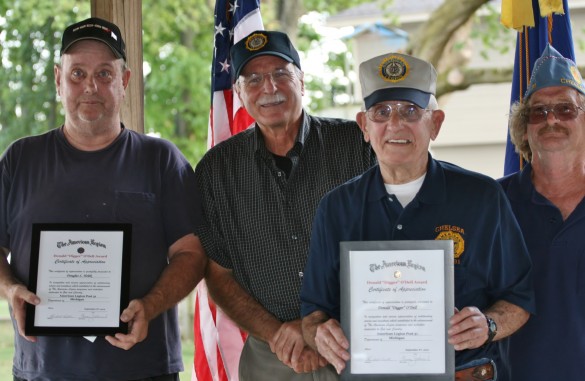