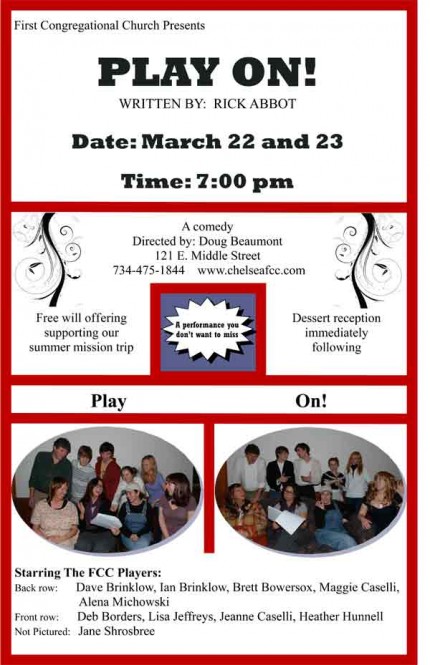 Ten cast members will perform a comedy “Play On!” by Rick Abbot at the First Congregational Church on Friday, March 22 and Saturday, March 23 and both performances are at 7 p.m.

The annual play is a free, but donations are encouraged, as all proceeds offset the costs of church member’s annual mission trip in July.

This year, they will return to Middleburgh, N.Y. to help with relief efforts in the wake of Hurricane Irene, which went through the small town in New York.

“Play On!” is a three-act play said Director Doug Beaumont and “it’s a play within a play.” During rehearsals of a play, its writer continually makes changes — right up until opening night, which plays havoc with the actors trying to learn their lines and stage cues.

But in the end, the writer is given her comeuppance.

The actors range in age from 14 to 60 years, Beaumont said, and they have been rehearsing since the beginning of the year for the fundraising production at the church, which been taking place for about six or seven years.

And, there’s a dessert reception following the performances.

The play serves as the largest fundraiser for the mission trip and if folks would like to donate to the cause but can’t make it to the play, they can drop off a donation at the church made out to First Congregational/mission trip and any amount will help offset the out-of-pocket costs of the trip for church members.

The church is located at 121 East Middle St.