Members of  Chelsea ARC, the Chelsea ham radio club, spent Saturday and Sunday, June 22-23, inside the Palmer Auto Sales building participating in the ARRL Field Day, a 24-hour Amateur Radio event joining thousands of other radio operators across the United States and Canada.

The event serves as an emergency preparedness exercise where the hams try to contact as many other hams as possible, a social event and a way to introduce their hobby to the public.

“Field Day is an annual opportunity to challenge ourselves to excel on our local, regional, national and global stages,” according to information about the event. “It is truly an umbrella under which the panoply of opportunities and experience we all share can flourish.”

Jeff Cowall says with a smile that Field Day is “a fun way to play radio, show the public what we do and … it gets us out of our caves.”

In a normal year, the ham radio operators speak to hundreds of other operators, but Saturday night, because of the weather, they weren’t having their usual success, and had only spoken to about a dozen of their fellow hams, mostly in the south, Cowall says. 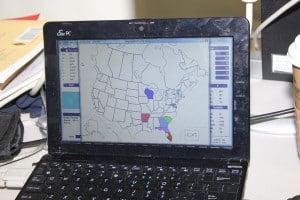 The hams had to set up their own antennas and can’t use commercial power, so their communication’s systems were running off a series of generators.

And although this is a fun competition, it’s important to remember that ham radio operators are part of the emergency response chain because when the power is out or disaster strikes, they are able to keep communications open with their radio skills when others can’t. 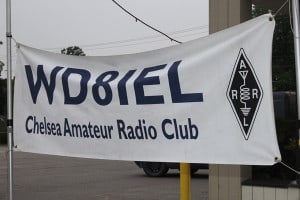 Early Saturday night, there were four licensed ham radio operators on their radios — all of them vying to talk to a fellow operator in the Virgin Islands.

Sacks says his dad had an interest in radio and he’d been involved since he was 12 years old. Calling himself shy at a young age, ham radio held a special fascination for him, something that he’s continued to enjoy as an adult.

“We can broadcast on frequencies that others can’t,” Sacks says of ham operator license privileges.

Field Day takes place the third weekend in June each year and more information about the event can be found here.