Tom Kladzyk of Manchester and his Holiday Lighting Service have been creating holiday light displays throughout the area since 1988.

This weekend, they were in Chelsea working on 34 downtown trees and about 28,000 lights as the city gets ready for Hometown Holiday and the ensuing Christmas season.

He said that he’s been designing Chelsea’s tree displays since 2009 and although the LED lights still work, the ones currently located in the trees are reaching the end of their useful life.

“It’s a hostile environment (because of the road salt, weather and car fumes) and there is a lot of corrosion (on them),” he said. “We’re going to patch them together this year.”

Kladzyk knows quite a bit about the lifetime of Christmas lights; he hangs them in a number of cities and villages through the county including Ann Arbor, Saline and Manchester.

He said previously, he and his employees are in trees about 10 months a year.

The displays typically last about three years and then trees should be trimmed and the lights restrung.

Chelsea’s trees were trimmed this year, he said, adding that “Chelsea’s (light display) is a big job for us.”

The business owner said he likes being in Chelsea. “We invest ourselves in all the communities we serve,” he said. 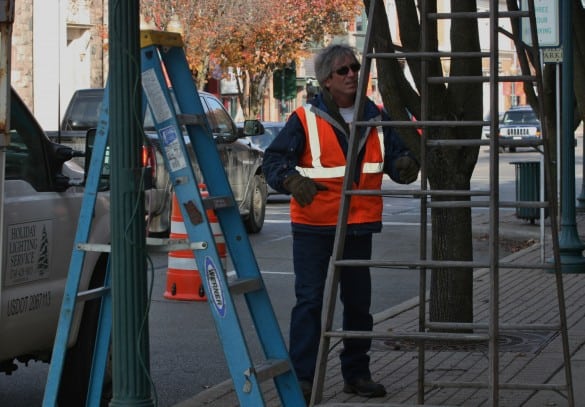