The annual Chelsea Hometown Holiday event is a festive, fun-filled weekend celebration, which traditionally kicks off the holiday season in the city. 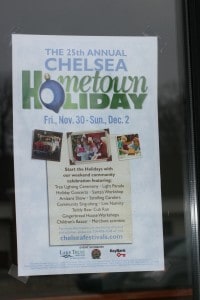 This year marks the 25th year for the event, which will take place the weekend of Nov. 30 – Dec. 2, and it’s sponsored in part by Key Bank, Chelsea Teddy Bear Company and Lake Trust Credit Union.

The many activities begin Friday night when Santa Claus arrives to light the giant Christmas tree at Pierce Park. Then youngsters can sit on the big fella’s lap and share their wish list at Santa’s workshop at The Depot on Jackson Street.

“Unlike some of the other big events in town, this event is really for the people of Chelsea,” says Bob Pierce, executive director of the Chelsea Area Chamber of Commerce said in a press release.

“This is a true local celebration and we don’t really market outside of the community for that reason,” he said in a press release.

Included in the festivities is the 8th annual Holiday Light Parade along Main Street, which will be lit with luminaries, and following the parade, there is a community sing and afterglow party at Chelsea Teddy Bear Company.

“The parade and sing-along afterward really represent the holiday spirit here in Chelsea,” Pierce says. “It doesn’t get much warmer or fuzzier than that event.”