Following four years of planning, the Gateway Communities Initiative, which includes Chelsea and the surrounding communities, launched a new brand and website Friday, Sept. 28, to promote outdoor recreation in the area.

“The Big 400,” is an area of about 400 square miles of Southern Michigan, which encompasses communities in Washtenaw, Jackson, Livingston and Ingham counties and is connected by public lands, paths and waterways.

It’s a collaborative effort between a number of partners, including the Department of Natural Resources, local governments and schools, several chambers of commerce, convention and visitors bureaus, the Legacy Land Conservancy, Dahlam Conservancy, the Michigan United Conversation Clubs, and area businesses.

“We envision The Big 400 to be an important economic development tool for our region,” said Bob Pierce, executive director of the Chelsea Area Chamber of Commerce.

Sue Lackey, executive director of the Legacy Land Conservancy, summed up the initiative by saying, “We have some really special areas (here) that Mother Nature gave to us — farms, parks, forests, waters and small towns. We don’t have to build something; it’s already here.”

She said that by marketing and promoting these recreation areas, “The Big 400 enhances our economic vitality; it’s a no-lose opportunity.” 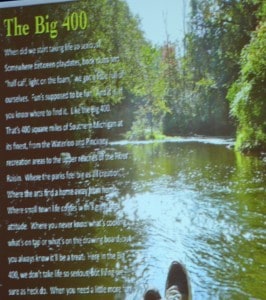 Lackey said this is “a new economic reality that takes advantage of the resources we already have.”

The economic strategy for the region is modeled after The Conservation Fund’s program “Balancing Nature and Commerce in Communities that Neighbor Public Lands,” according a press release. And, the project was lead by Mark Lantz, a branding expert of The Mark Lantz Project.

“Working with our marketing experts, the convention and visitor bureaus, we will promote the area for outdoor recreational tourism,” Pierce said. “We also plan to identify business strategies that will help the communities grow their local commerce based on the natural assets of this area.”

The Big 400 has partnered with the Jackson Convention Visitors Bureau to expand the “Cranes, Colors and Cabernet” event, which celebrates the migration of the Sandhill cranes. The event is Oct. 19-21. Prior to this event, there is Festival of the Sandhill Cranes Gather on Oct. 6.

For more information, click here, which launched on Sept. 28.

It’s Time to Dust Off Your Library Cards

June 16: Plenty of Fresh Produce, Flowers and More at the Wednesday Farmers Market