There were a lot of smiles on about 65 faces Tuesday morning outside the new police building — but none as big or as bright as the grin on Chelsea Police Chief Ed Toth‘s face.

After breaking ground on May 5, 2011, a little more than a year later, the 36-member Chelsea Police force, including full-time and part-time officers, dispatchers, reserve officers and crossing guards have a new home with lots of storage, offices, a squad room, and space to do their jobs without stepping or bumping into each other.

There’s plenty of parking nearby for patrol cars, shiny new floors and lockers and cheery wall colors. Although by some standards rather basic in form and function, what’s important to the department is a building that offers an environment that they can be proud of when they arrive at work to serve and protect the about 5,000 residents of Chelsea.

Here’s a previous story from a tour of the building.

“It’s an honor to be here today, in the company of men and women who have dedicated their lives to keeping our citizens, neighborhoods, streets and downtown friendly, safe and secure,” said Mayor Jason Lindauer, before the official ribbon was cut and residents were given tours of the new facility that includes a City Council chambers. 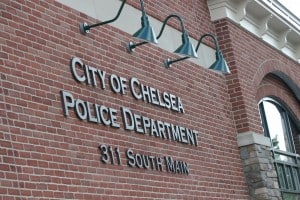 “In a world that presents many new challenges, shouldering the responsibility of protecting others demands professionalism, compassion and progressive intellect,” the mayor said, adding, “These qualities embody our law enforcement officers and the department they lead and I am truly proud to represent the 5,000 citizens who have helped to provide this facility.”

“To Chief Toth and to all the fine officers of the force, I join our grateful city in thanking you for all that you do and offer out continued support and our heartfelt congratulations on another job well done,” he said.

In addition to Council Members Cheri Albertson, Ann Feeney, Kent Martinez-Kratz and Marcia Parker, a number of members of the Wastenaw County Sheriff’s Department were in attendance, including Sheriff Jerry Clayton, and Undersheriff Mark Ptaszek.

“Twenty years from now when these guys are retired and bring their families back, this will still be something to be proud of,” Toth said, adding that this building were serve the needs of the police force for another 20-25 years or longer.

He also said there is meeting space available for groups and residents. “Just call ahead to make sure it’s not booked,” he said. 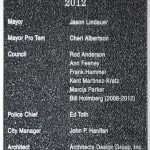 “This is great for the citizens of Chelsea,” said Clayton. “This is something they should be very proud of and something very impressive for Chief Toth, who we (the sheriff’s department) have a close relationship with.”

Clayton said the building looks nice and “if you are going to spend money, it should be reflective of the values of the community and this strikes a balance.”

State Rep. Mark Ouimet, R-Scio Township, called the new building “A very nice facility and even in these economic times, it was something that was long overdue.”

Here’s a list of the men and women who serve and protect the residents of Chelsea.

On parking enforcement are: Ron Laczo and McDougall.