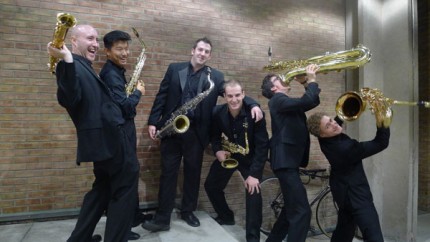 The Moanin’ Frogs, a saxophone sextet, will present a concert on Friday, March 28 at 7:30 p.m. at The Chelsea First United Methodist Church, 128 Park Street.  The concert is free and open to all.

Programmed musical pieces will range in style from Dvorak to bebop, Dixieland to Chick Corea, Gershwin to William Bolcom, to original compositions by the Frogs themselves.

Recent performance highlights include performing at The Kennedy Center for the Performing Arts, a special feature on Detroit Public Television’s Detroit Performs Series, a lecture-recital at Oakland University, a private event in Beverly Hills, CA, the University of Michigan’s Collage Concert at Hill Auditorium and an appearance at “The Big House” football stadium for Commencement 2013.

The Frogs inaugurated a film series at The Michigan Theater in Ann Arbor, where they opened for the River Raisin Ragtime Revue.  They frequently work with children at public schools throughout Southeastern Michigan.