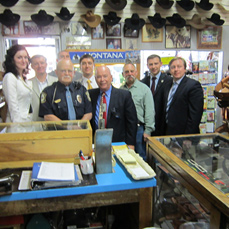 Several mayors from the Ukraine stopped by and visited the Mule Skinner Boot shop on their tour of the United States last Thursday.

They has also been to Washington D.C., Philadelphia and Ann Arbor, according to Pam Conn, of the Mule Skinner.

“They had lots of questions for Mac (Leonard McDougall) about his military service and police service,” she said.

When asked what kind of questions they had for the former Chief of Police, he said, “They were curious about the police department rankings.”

And although bigger police departments do use a star ranking where four stars would be the chief, it’s not that way in Chelsea.

He said that the visitors had been in Lansing to see how government works and that they’d stopped in Chelsea to have dinner at The Common Grill, then went to the Mule Skinner.

McDougall said the mayors did not speak English, rather asked questions through an interpreter.

McDougall said he frequently meets people from Europe when he is out on foot patrol in downtown Chelsea.

“I’ve met them from England, Scotland and Ireland,” he said, adding that he had stopped by the downtown business as a courtesy call and happened to meet the visitors inside the store.

When asked if the Ukrainian visitors asked about crime in Chelsea, he said that they had not, but the people he’d met from other European countries had asked.

“We gave them the tour of all the exotic boots. They purchased handmade leather belts made here in Chelsea, by the Mule himself,” Conn said.

2 thoughts on “Mayors from the Ukraine visit The Mule Skinner”