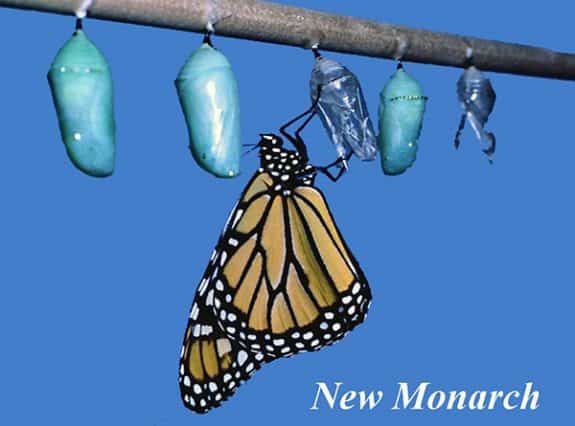 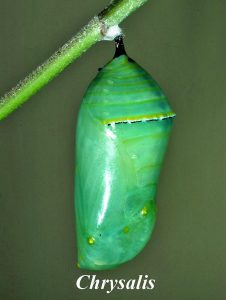 I saw my first adult monarchs this year in late May.

These were migrating individuals and early descendants of those that over-wintered in Mexico. I’m sure that the females laid eggs on newly emerging milkweed, but because they were so few and far between, I was content to wait for the first generation of local butterflies to emerge.

This usually occurs after the July fourth weekend.  Well that weekend is here. It’s time to start looking for monarch eggs and caterpillars. They should be available from now through early September.

The entire life cycle from egg to adult takes about a month, so raising and releasing monarch butterflies can be a great summer project. The last and largest monarch generation of the summer will emerge as adults in late in August and early September. These will be the individuals that fly to Mexico for the winter. They will also make a great living life cycle project for the elementary classroom at the beginning of the school year. If we don’t have on site learning in schools this fall, it will make an interesting home-school project as well. 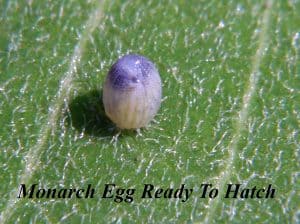 Monarch eggs resemble tiny, striated, pale green footballs and are usually laid on the undersides of milkweed leaves. It takes some practice to learn to recognize them. The larvae on the other hand with their colorful bands of black, white and yellow really stand out. The caterpillars grow from egg to full size in about two weeks. Then they leave the food plant and may wander some distance before forming a pupa (or transformational stage) on some suitable object. The pupa stage in butterflies is called a chrysalis. In moths, the pupa is inside a cocoon spun by the caterpillar.

The caterpillar attaches to its perch from a pedicel of silk and hangs upside down in a J formation for about 24 hours. Then the caterpillar skin splits and falls away to reveal the chrysalis.

The monarch chrysalis is an impressive emerald green, adorned with a necklace of gold and black markings. These markings may seem to be ornamental, but are apparently centers for hormone production that help with the transformation. 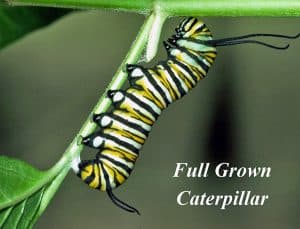 After 12-14 days the surface of the chrysalis become transparent and the colors of the fully developed butterfly can be seen underneath. Within 24 hours the adult butterfly will emerge, usually in the morning. By afternoon the wings are fully expanded and hardened and the butterfly is ready to fly.

If you would like to try your hand at raising some monarchs, I have attached a printable PDF with complete instructions as well as additional life cycle information. I will be raising some again this summer to share the experience with my grandchildren ages, ages 6, 5, 4, 3, and 2. Last summer when they came to visit, the first thing they wanted to do was look at the caterpillars.

Aug. 10: what’s on the Chelsea Board of Education agenda

Aug. 12: what you’ll find at the Wednesday Farmers Market

This week on Around Town with Linda: Warren Mayer

Dragons and Damsels (with slideshow)