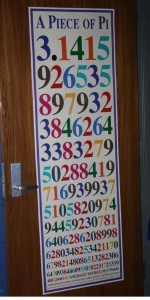 (Publisher’s note: There is a correction in the total number of digits memorized by the 7th-grade contestants.)

Math has made a lasting connection between two delightful young ladies at Beach Middle School.

Caitlin Dusenbury and Hannah Greenstein, both 6th graders, decided to enter a school-sponsored fun contest in honor of Pi Day on March 14 in which they tried to memorize as many digits in Pi as they could.

The two friends said they spent the last 10 days working toward the goal — working their memorization in groups of four digits at a time.

“We became closer thru Pi,” Hannah said of her friendship with Caitlin.

In fact, both young ladies memorized more than 100 digits and Caitlin set a school record when she recited 108 of them. Her friend, Hannah was only a few digits behind at 104.

“It was fun,” Hannah said, adding, “It was worth it,” especially after she was able to “pie” her principal Nick Angel.

For Caitlin, it was a chance to pie her math teacher Mike Lott.

“It’s fun; it’s cross-curricular and it’s a cool math idea and we can make it fun for each class,” Lott said, adding “All the kids came together to have a fun day around March 14, Pi Day.”

Both girls were able to relish their accomplishments in front of about 90 of their classmates and both agreed, it was one of the most fun things they’ve done in 6th grade.

Students who chose to be part of the contest spent the last few weeks memorizing as many Pi digits as they could in anticipation of March 14, Pi Day.

And, here are the 6th-grade winners from teacher Amy Doma, who made the announcement to the whole 6th-grade class on Thursday afternoon.

“We had an amazing Pi day today,” Doma told parents in an email, thanking the donors who contributed more than 39 pies and other supplies.

“We could not have done this without you,” said she in an email.