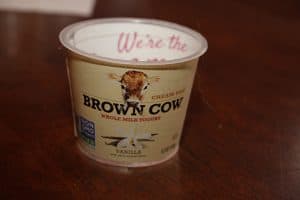 As I began to eat yet another item from the frig with a past-due expiration date, it occurred to me that although I’m trying not to waste ANYTHING while “Making Do,” at some point, I might be really pushing the limits.

First, it was the turkey, then the last inch of milk in the container and today, it was yogurt.

The last container of the only yogurt I like: Brown Cow vanilla.

But it was a sacrifice I had to make. And, it was yogurt, so just how bad can that be?

I did give it the smell test; then the tiny bit of taste test. And those seemed OK, so I dove in.

Even though my brain was saying: Stop. This isn’t smart.

But it was my last one and I knew it would be a long time before I’d be going to Plum Market or Whole Foods to get more.

So, rather than wasting it; I decided to eat it … really, really fast.

But I will admit, by the time I got to the bottom of the container – the dogs got more than they usually do – because my brain was finally in sync with my taste buds and the combination did make it taste like it was “a little off.”

So, I started thinking about expiration dates on food, which led to me chewing on a couple of papaya tablets, which I use for the occasional upset guttock. Hoping this would serve as a good precaution.

And I came to the conclusion that I’m pretty sure these dates are there for a really good reason. So, perhaps following them (within reason) in the future might be an even better idea than ignoring or being oblivious to them.

So, while letting these smarter ideas marinate in my head, I decided to enter the place where I seek inspiration to write stories — the shower.

To figure out how best to accomplish this.

While enjoying that feeling of getting clean with the hot water and nice smelling soap running down my back, I was pondering what “casual wear” I’d put on that day.

And that’s when it hit me.

(Let me be clear here, the above was the funny part, my attempt No. 4; below is the useful part.)

I should go through all the items in the frig and the pantries and put together a list of what’s there and when they expire.

Boom. Great idea. Not just for me, but for you, too.

I haven’t gotten through it yet, because “organizing the spice rack, the pantry or the refrigerator” is a clause that is expressly forbidden in my two full-time employee’s contracts) but I did start. And thought I’d share this as a way to productively keep your family members moving and off the couch, minds and bodies occupied by doing something that I bet can be stretched out — to take up many hours, days, and weeks, even.

And it follows the stay home, stay safe executive order, too.

Those puzzles and board games I see you all playing on Facebook, they are good ideas, too, but, now, you have a really useful idea to get everyone working toward common household goals.

And think about it, coming together as a family to do something fun and useful has no expiration date.

Everyone could come up with their own ideas for future meals and projects thereby also taking that daunting task off the primary meal maker in the family and finally getting those To Do projects actually done.

Before the weather gets nice and the grass and yard work becomes a requirement.

Think about the possibilities … not just for today, but for the future. Soon, you could have organized rooms, closets and garages. And, while doing so, put together boxes of items to donate to Faith in Action that will benefit community members in need.

And unlike me, who is still thinking about what happens when you eat food that’s well past its expiration date, you’ll have everything organized to avoid that problem.