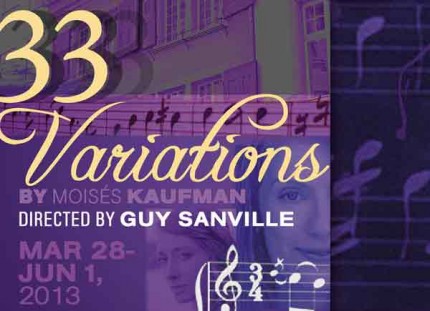 The Purple Rose Theatre Company will begin a 10-week engagement of 33 Variations by Moisés Kaufman (The Laramie Project)  from Thursday, March 28 through Saturday, June 1.

Moving between the past and the present, 33 Variations centers on acclaimed musicologist, Katherine Brandt, and the object of her professional passion: Ludwig van Beethoven, according to information about the play.

In 19th century Austria, Beethoven wrestles with a commission he cannot complete. In present day, Katherine struggles to unlock the mystery behind Beethoven’s obsession with a simple waltz. As she races against time and her failing health, Katherine discovers the true nature of Beethoven’s work and gains insight into the other mystery in her life: her daughter.

33 Variations illustrates how the very passions that threaten to overwhelm us can also save us, according to the information.

Seven low-priced previews will be performed Thursday, March 28 – Thursday, April 4 and there is no performance on Easter, March 31. Regular performances are Wednesdays through Saturdays at 8 p.m. with Wednesday and Saturday matinees at 3 p.m. and Sunday matinees at 2 p.m.

All performances will be held at The Purple Rose Theatre Company, 137 Park St.