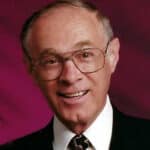 Don graduated from Carleton Airport High School in 1956. He served in the US Army from 1956 – 1958, and later attended Cleary College and Wayne State University.

Before becoming a funeral director in 1974, Donald was employed at Tecumseh Products for 13 years. He and his wife Linda purchased Cole Funeral Chapel in 1977, and was dedicated to helping grieving families in Chelsea until his retirement in 1999. He continued to assist and advise at the funeral home until the end of his life.

Don has lived in Chelsea since 1977, moving from Tecumseh where he and Linda had resided since 1960. Over the years, Don and Linda attended Chelsea First United Methodist Church, Chelsea Free Methodist Church, and St. Paul United Church of Christ. Don was a distinguished Past President of the Chelsea Kiwanis Club, where he was awarded the Hixon Award; was Past President of District 2 of the Michigan Funeral Directors Association; and a board member of Faith in Action.

On Friday, Don will take another ride to Oak Grove East Cemetery. However, on this trip Don will not be the funeral director and he will not return to the Cole Funeral Chapel as he had done so many times before. Don will not be the driver of his lovely 1916 hand carved hearse which he restored. He will be the proud passenger on this, his final trip.