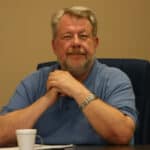 Frank Hammer passed away unexpectedly and peacefully in his sleep on Oct. 1, 2021.

He was a resident of Chelsea for over 40 years, having moved to Albany, NY a year ago to be near his son. Born in Gulfport, Mississippi on July 3rd, 1945, he graduated from Florida State University and received his PhD in organic chemistry from the University of Michigan.

He spent most of his adult life in Chelsea, Michigan employed as an environmental toxicologist, initially for the National Sanitation Foundation (NSF) and later for Underwriters’ Laboratories. His great gift in life was fixing things, and he worked countless hours on a wide variety of major home renovations and his lifelong passion, fixing and driving German automobiles and motorcycles.

He measurably improved his community through four decades of civic service. The list is long. First elected to the Chelsea City (then village) Council in 1990 and re-elected until 2019, he also served on boards of the Chelsea Senior Citizen Center and the Chelsea Area Fire Authority.  He had a rare skill of bringing disputing parties to the table, to collaborate on a goal rather than compete. He used this in the early ‘90’s to bring the McKune heirs and other Chelsea interests together to settle the property ownership differences, which allowed for the plan to fund and build the library we have today.

Some other examples were the community commitment to build a new police facility, the up-grading of the water treatment facility, and incorporating parcels of township land to “square off” the boundaries of the city. His proudest achievement started in the mid 1990’s, when he envisioned and developed a then-novel project for regional community recycling. Frank served until 2015 as the volunteer president of the Board for what became the Western Washtenaw Recycling Authority.  WWRA was a national model for similar inter-governmental cooperative recycling movements.

To leave a message of condolence for the family, please visit https://www.hansfuneralhome.com/frank-t-hammer. A memorial service in Chelsea will be held at a later date. Memorial donations may be made to The Union of Concerned Scientists, The ALS Association, or The Nature Conservancy.