Reggie is sad to report that the Western Washtenaw Recycling Authority (WWRA) advisory board has made the decision to ask residents to stop sending glass for recycling.

No clear glass, no green glass, no wine bottles, no jelly jars … nada. Nothing.

Reggie has watched the market for recapturing glass break apart (no pun intended) over the last half decade. Glass was rarely re-used in its original form, but for many years, there were companies that would purchase the glass, return it to its molten state, and re-cast it for second life. This industry, and the recycling market it provided, has largely disappeared.

Five years ago, there were about half a dozen Michigan companies that bought and processed recycled glass. Now, there is only one such company left in Michigan, and it charges—not pays—for the glass it collects, as well as charging for transporting it to their facility in Dearborn.

It’s good business for them, but cost-prohibitive for WWRA. For over two years, WWRA has worked tirelessly to find a different path for recycling glass, without success. Recycling centers everywhere are challenged with the same changed market landscape. 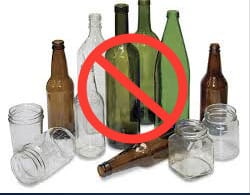 WWRA has been collecting glass, even though it couldn’t be sold, in the hopes that the market for buying recycled glass would recover. However, the cost of disposal has become too large. Five years ago, when glass could be sold, the landfill cost for glass was zero. Each of the last two years, it has come to about $40,000 – or about 75 percent of WWRA’s landfill costs. That is tax money thrown away, in all senses of the phrase.

The cost of including glass in your regular trash pickup is next to nothing for the average homeowner. Collecting and disposing of it through the recycling facility is threatening the viability of the entire recycling program. So Reggie hopes you will start throwing your glass in with your trash, and save WWRA from doing it for you.

Reggie wishes it were otherwise, and appreciates all the participants who will begin to change their habits.

Reggie’s Royal Recycling Review:
Break the glass habit—toss it in the trash.

3 thoughts on “Reggie the Recycling Raccoon says: ‘we are breaking glass’ at WWRA”

Save the Date: Chelsea Lacrosse Fundraiser ‘Comedy and Cocktails’ March 11