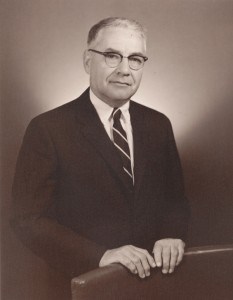 If John Keusch were still with us today, he’d remind us to “stay strong” as we say our final farewells to a man who could tell you the history of most of the people,  homes, buildings and businesses in Chelsea.

His funeral Mass will be held Monday, June 24 at 11 a.m. at St. Mary Catholic Church with Rev. Dr. William J. Turner officiating, and the family will receive friends at church from 10 a.m. until the time of service. Burial will take place at Mount Olivet Cemetery.

Keusch died on June 9 at 103 years old. A well-known attorney and gentleman, he was the oldest serving attorney in the State of Michigan until he took emeritus status last year.

But the man who was born on Christmas Day in 1909 was so much more than that. He was an encyclopedia of knowledge who never lost his wonder in learning more about the issues and people around him.

The son of Edwin J. Keusch and Ellen “Nell” (Walsh) Keusch, he attended St. Mary’s School and was in the Class of 1927. A star athlete in his youth, Keusch was a member of St. Mary’s 1926 High School Basketball Champion squad for “Class D” schools.

He attended Eastern Michigan University then transferred to the University of Michigan where he attained his Law Degree in 1933 and was admitted to the bar in Oct. 10, 1933, at the age of 23, according to his obituary.

He was named president of the Washtenaw County Bar Association in 1961, and was a member of both the Federal and Michigan State Bars.

Keusch was a long-time Chelsea City Attorney and Director of the Chelsea State Bank. He was a member of the Chelsea Rod and Gun Club, American Legion Post #31, Chamber of Commerce, U of M Club, Knights of Columbus, Inverness Country Club and Kiwanis, according to his obituary. 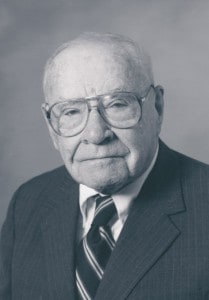 In 1969, Peter C. Flintoft, and in 1998, Patrick J. Conlin, Jr., along with associates Diana R. Newman and Jeffrey D. Alber joined him in the Chelsea law practice. He took emeritus status with the Michigan State Bar in 2012, being not only its oldest member but also the Michigan lawyer with the longest tenure of practice, according to his obituary.

Memorial contributions may be made to St. Mary Catholic Church or to a charity of your choice.