On Thursday, the first of 100 entertainment acts will begin getting phone calls from the Sounds and Sights Committee to let them know they made the cut and will perform before thousands of visitors at Chelsea’s 9th Annual Sounds and Sights on Thursday Nights.

Nine judges spent Monday evening inside the First United Methodist Church listening to almost 40 acts while Craig Common, the chairman of the event said he’d already screened about 50 electronic auditions. Then on Wednesday, members of the committee will review all the performer’s auditions and select the top 100.

Common said they were looking for acts of all ages and different genres. 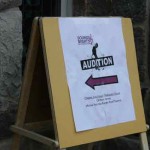 Ten acts will perform each Thursday at various locations downtown.

From tap dancers to singers, jazz performances to rock and roll, the judges agreed that the level of talent in the area was high quality.

“It’s always inspiring to see the local talent in the area from the young to the more mature,” one of the judge’s said.

At the start of Monday night’s auditions, Common said last year was the most diverse group of performers to date but he had high hopes for the groups and individuals auditioning Monday night — some of whom auditioned previously but had not been chosen.

“We look at all of them and decide whether they are good enough to go on the street and perform live,” Common said.

Musical acts will include folk, bluegrass, Celtic, jazz, classical, country, Latin and everything in between – perform at 10 stage locations around the downtown.