(Chelsea Update would like to thank Tom Hodgson and the Waterloo Natural History Association for the information and photos in this story.)

In the summer of 1965, a young man named Tom Hodgson graduated from Michigan State University with a degree in wildlife biology.  Soon thereafter, he had the good fortune to be hired by the Michigan Department of Conservation as the first ever naturalist (officially called Park Interpreter) for the Waterloo Recreation Area, the Lower Peninsula’s largest state park.

He spent much of his first year exploring the park’s 17,000 acres. And was thrilled to find the park’s oak-hickory forests, beech-maple woods, marshes, swamps and bogs were home to nearly every species of flora and fauna found in Southern Lower Michigan.

His most unusual find, however, was not in the park at all but on private land nearby. During his travels, he talked to many, long-time area residents and some mentioned the existence of a “Christmas Tree Bog.” Now Christmas trees don’t usually grow in bogs, so this had to be something really special.

It was also fortunate that his college roommate, Ron Hoffman had grown up in the Munith area and returned after graduation to teach biology at Stockbridge High School. He knew where the bog was located, and took Tom to see it. The “Christmas trees” growing in the bog were actually black spruce.

And, the “Christmas Tree Bog” turned out to be the southern-most example of a black spruce bog in Michigan, nearly 200 miles south of the normal range for this tree species.

Tom showed the bog to Dr. Warren H. Wagner, professor of botany at the University of Michigan. Dr. Wagner contacted the Michigan Natural Areas Council and Michigan Nature Conservancy.  With the help of the Nature Conservancy, the department was able to purchase the bog, and additional acres to the north that provided drainage and kept it supplied with cooling water.

The bog is located on the north side of Waterloo Munith Road just west of Parks Road in the northern part of the park. It has probably existed since the end of the last Ice Age some 10,000 years ago.  As the climate warmed other Southern Michigan spruce bogs

disappeared, but this one has survived.

In addition to the towering black spruce, the bog is home to sphagnum moss, pitcher plants, sundews, and the pink moccasin flower orchid. The diminutive saw-whet owl is also found there on occasion.

The bog is surrounded by heavy brush and swamp hardwoods and cannot be seen from the road. There is no trail that leads to or through it. To get in and out safely, one must have a compass and some waterproof boots, and be willing to crash through a lot of pucker brush. 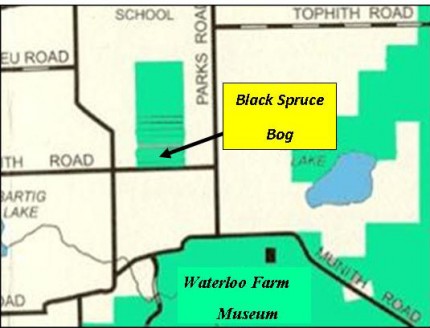