This long-time (and very yummy) July 4 event will see the first half chickens come off the large outdoor pits in time for people to begin purchasing them at about 11 a.m.

The chicken dinner are $9 and include cole slaw, a bag of chips, baked beans, a roll and butter. 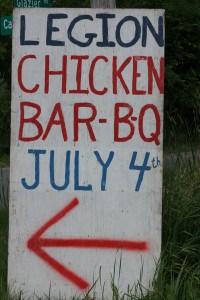 This is the fourth year that the Sons of the American Legion have organized the event that’s been ongoing for about 40 years says John Beeman, the chairman of the event.

About 600 half chickens will be cooked and basted with the Legion chef’s special recipe. The dinners can be eaten at the post at 1700 Ridge Road or taken home.

Be sure to get there early because these dinners sell out fast says Craig Maier, the post’s financial officer.

Only once has the popular annual event been rained out, Maier says.