More than 150 people of all ages arrived at Veterans Park Sunday afternoon for a special tribute event that included special remarks by James Alford, a Chelsea Army helicopter pilot.

He reminded everyone of the sacrifices made not just by veterans but also by their families and friends.

The featured speaker served six years in the Army and flew OH6 and UH-1 Huey helicopters, said Mayor Jason Lindauer, who introduced him.

Lindauer said, “Vietnam was the first real helicopter war “as he introduced Alford’s distinguished service to his country.

Alford did two tours in Vietnam, first from January 1969 until December 1969 for the 20th Engineer Brigade and then in December 1971, he returned to Vietnam and flew for the Republic of Korea, White Horse Division in II Corp under the Ghost Rider call sign, “flying a total of 1,500 hours of combat time during his tours,” Lindauer said.

Alford said he requested “fixed wing school” and was assigned to “rotary wing school,” which drew chuckles from the crowd.

He served six years in the Army beginning at the age of 20. In December, 1972, Alford resigned from the Army with the rank of Captain in the Engineer Corp.

Alford said, “Veterans wrote a blank check payable up to their life,” in thanking all the men and women who have served their country.

Students from South Meadows School sang “She’s a Grand Old Flag” and taps was played, marking a fitting end to the program. 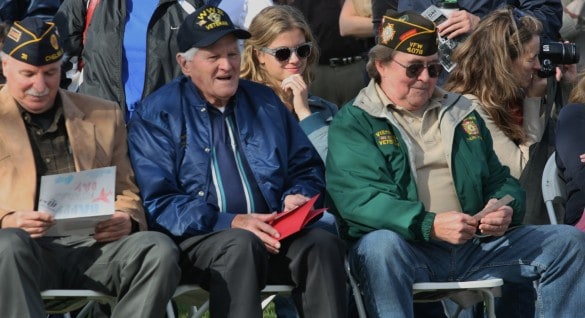 Veterans were given cards by South Creek Elementary students.

Mark Your Calendar: Let It Snow Contest from Chelsea Area Friends For Recreation