Mike Gustafson, a 25-year veteran produce clerk at Kroger, spent his day off handling fruits and vegetables as a first-time judge at the 75th Annual Chelsea Community Fair on Monday, Aug. 20.

He approached his judging assignment as he would his job — searching for the best-looking produce; examples that he’d be proud to see stocked on the shelves of his South Maple Road, Ann Arbor store.

“I looked for uniformity, texture, freshness, but aesthetics are key,” he said of the winning entries. “I’m looking for the things I’d stock.”

For instance, in a zucchini, he said, “I’m looking for the prototype, one that looks good for first place. Not the biggest or the smallest, but what I’ve learned over the years in my job.”

In other words, looks are important. A green or over-ripe tomato isn’t going to win because it’s not something that people would buy from the produce aisle in a grocery store. Or at a farmer’s market, for that matter.

In fact, Debbie Stappish, one of the agricultural exhibit superintendents hated to do it, but she said he had to turn away a few entries this year because they weren’t show quality. She said they’d already split open when they arrived and were rotted.

There’s a certain expectation when you see “the quintessential squash or ear of corn or pepper or tomato,” the judge said.

In other words, if it looks good enough to eat, usually it is.

When asked of all the crops he judged, which was the easiest, he said the corn because he handles it so often. “It’s the look and feel of it. You just know a good one when you see it,” he said, and when he pulled down the husk of the first-place ear, sure enough, it was perfect.

Ditto the tomatoes, which were one of the larger and stronger entries. “I’m looking for uniformity, for shine, the color. The winners, they made me want to take off the stems and eat them, especially the smaller ones.”

The pattipans were the toughest class for him to judge, he said, because he wasn’t as familiar with them as say peppers or potatoes. He just doesn’t see them very often at the store.

The watermelons weren’t an easy one for him, either, he said. “They were challenging, but I based my decision on sound; it’s that hollow sound (when you knock on them) that tells me they are ripe and sweet.”

All in all, he said, “The judging was fun, but challenging. There were so many good ones and it was the minute things, the subtle differences, that made the difference. The ones I judged could have easily made it into our store.”

In fact, he said, the judging experience will help him in the produce department when he’s back at work. “This sharpened my instincts.” 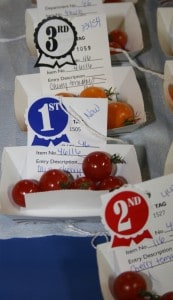 Publisher’s note: I entered “my crops” in the agricultural exhibit at fair this year for the first time, knowing that I’d interview the judge once all the judging was over and find out why some entries won and others didn’t. I arrived as the judge was finishing his assignment and anything I’d entered had already been judged.

I brought the best of what I had; several varieties of cherry tomatoes, some hot peppers, and an eggplant. All were grown in small hanging baskets, in what I call my “crop garden.” Two kinds of tomatoes took first place and my peppers took a third place. My egg plant and creative use of vegetable entry did not place, but I’m armed with more ideas for next year.

When I entered “my crops” on Sunday, I thought I’d be writing a funny column about being “a participant” on Monday night. Well, a funny thing happened on the way to writing that column.

I had beginner’s luck — combined with some great advice from a few farmer friends, who gave me tips about how to show produce and how having shiny, uniform entries with the stems on, was what the judges would look for — and it turned into a story.

So, I guess, the moral of this story is this: Don’t be afraid to grow a few crops next year, even in small containers, bring the best you have and try your luck at fair. It doesn’t cost anything to enter and just make sure that they look really, really shiny. You might be surprised.