Although the medals earned by Dexter Township resident Michael Favre while serving in Iraq were awarded 20 years after he completed his tour of duty, finally holding them in his hands was worth the wait.

Especially impressive was the Kuwait Liberation Medal from Saudi Arabia, which was nestled in a beautiful green box.

Favre served in the Army for three years, first at Fort Benning, then in Germany before he was deployed to Iraq. Monday night he finally received the Kuwait Liberation Medal from Saudi Arabia, the Kuwait Liberation Medal and the Southwest Service Medal, plus two certificates for his service during what’s considered the Cold War era, from 1945-1991.

He said he tried to get the medals a few times himself, but was unsuccessful. So he contacted 7th District Congressman Tim Walberg‘s office and staff member Elise Layton cut through all the red tape and was able to get them in a matter of months, Favre said.

Everyone else in attendance at the ceremony Monday night at the Chelsea American Legion Post 31 really appreciated the sacrifice that Favre made for his country.

And to have his Congressman personally deliver the awards — that made finally receiving them “pretty cool,” he said.

“There’s a commitment that comes with service and there are costs that come with that commitment and love of country,” Walberg said.

Everyone in the room wholeheartedly agreed. Especially his wife, Bridget, who understands the sacrifice he made.

“We are very proud of him,” she said. “He’s taught a sense of patriotism to our children and they understand the sacrifice that he and other veterans have made for this country.”

Michael Favre, 41, joined the Army at 18 years old, right out of high school. Since then he’s received two college degrees and served in the Colorado National Guard.

The family moved from Colorado Springs, where he worked at the Olympic Training Center, to Ann Arbor before moving to Dexter Township a year and a half ago.

Favre is the director of strength and conditioning for Olympic sports at U-M and has worked with about a dozen current Olympians who are competing in London, including swimmers from Club Wolverine and wrestler Jake Herbert.

“We feel fortunate to live in an area where veterans are so appreciated,” his wife said, adding that the family attended this year’s Chelsea Memorial Day parade for the first time and were impressed by the support shown to the veterans by the community. 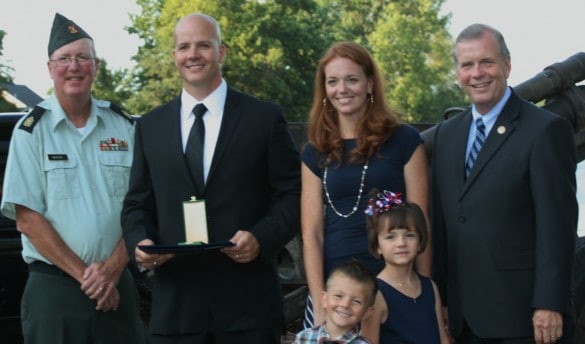