When the temperatures begin to consistently warm up in February, you’ll find Kirk Hedding outside in his sugarbush surrounded by 35 acres of maple trees pounding taps into trees.

And on some of those days, his wife, Michelle and their two daughters, Emma, 7 and Madeline, 3, are out there with him selecting which trees to tap.

This is the sixth year that the Hedding Family of Sylvan Township has been tapping the hundreds of maple trees on the family farm as a small business called H & H Sugarbush (which stands for Hedding and Hinderer). 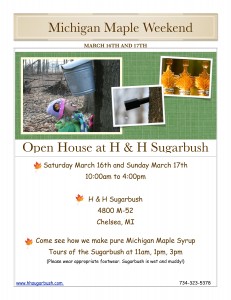 Kirk Hedding said the first year, he tapped 10 trees, and now he’s upped the number to 460 trees on the 300-acre farm.

He said his wife, Michelle’s parents live next door, and her grandmother lives the next house down. But his immediate family is the first generation to be maple tree farmers.

It used to take Kirk Hedding 4-5 hours just to collect all the sap — but with the 9,000 feet of tubing, this part of the process will go much faster this year.

The bright blue tubing runs from the taps in the trees to a collection point before it’s pumped to the sugar shack. It’s not a foolproof system, however, as Kirk Hedding says he has to check the lines for squirrel damage.

Both Emma and Madeline say they are big fans of maple syrup. They, too, like to go out into the woods with their dad to collect it or just watch the sap come into the sugar shack.

But it’s the end product – the maple syrup on pancakes and waffles, which is the best part.

“Different trees have different tastes depending on the soil,” Kirk Hedding says of the varied tastes of maple syrup, adding, “The first tap might be sweeter than subsequent ones.”

He says in the Midwest, people like a darker syrup for a stronger flavor, while in the East, the syrup tends to be a light amber color with not as strong a taste.

H & H Sugarbush, LLC is inspected by the state and sells its products not only at the farm but also at the Saturday Chelsea Farmers’ Market.

And, if you’d like to see how maple syrup is made, there will be a weekend open house at the sugarbush on March 16-17 from 10 a.m.- 4 p.m. where visitors will be given a free tour of the woods and a chance to see the operation in progress as the sap is boiled down.

There will also be a taste testing and a chance to buy the finished product.

H & H Sugarbush sells maple products that range in price from $6 to $52 that include everything from syrup to maple cream, maple candy and maple sugar to maple-covered pecans and almonds.