At the Garden Mill on Main Street, of course.

And the store’s new owner, Jennifer Fairfield of Bridgewater Township is just as passionate about gardening as Trinh Pifer, the store’s former owner.

In fact, it was seven years ago this weekend that Pifer held the grand opening of the store during Chelsea’s Summerfest, which is now known as the Sounds and Sights Festival.

Last year, Pifer became the Director of the Chelsea Senior Center and listed the store for sale.

But she said, “We were committed to keeping the doors of the Garden Mill open because our customers asked us to preserve the tradition and character that it adds to downtown Chelsea.”

And, almost a month ago to the day, on June 29, the Garden Mill was purchased by Fairfield, an avid organic gardener and birder.

“I plan to continue what Trinh’s done and put more emphasis on birding,” she said.

In fact, she did some serious rearranging of the store and put the gardening tools in the front where they can be seen as soon as a customer walks through the front door.

Fairfield said she chose to own a business in Chelsea because it’s “such a vibrant and active community.”

She’ll be heavily involved in the Chocolate Extravaganza, held in February, as well as the Chelsea Garden Walk, held in late spring, early summer.

Fairfield will continue the Green Thumb Series in the store and include canning and cooking demonstrations as well as providing tips on organic gardening and sustainability.

She said the store has a loyal following and plans to make the Garden Mill a “gardening store for all seasons.”

“Even when it’s cold and snowy, gardeners are still plotting and planning the garden and we’ll do that with you,” Fairfield said. 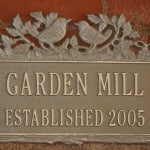 Maureen Tobin, long-time manager at the store, has stayed on, and said she loves that Fairfield has “the same commitment to community as Trinh, but brings a new perspective and interests to the store.”

“Everything needs refreshing,” Tobin said, adding that Fairfield has already made changes to the layout and what items are featured.

Fairfield starts her own plants, sells some of them at the Manchester Farmers’ Market and has a wide variety of items in a small garden space at her home.