Chelsea City Council members and staff discussed topics that ranged from road and sidewalk repairs to a year-round farmers’ market and the current state of city property during the city’s annual visioning session on Feb. 5.

Staff and council members were asked what issues or concerns they’d like to see addressed this year.

Among the suggestions were:

*upgrading the condition of some city streets and sidewalk as well as adding new sidewalks in certain areas of Chelsea.

City Engineer Christine Linfield said a new city-wide assessment of the roads and the sidewalks, called a PASER rating, was needed to determine the current condition of all the streets and sidewalks in the city to update the comprehensive list with estimated costs.

*the possibility of having a year-round farmers’ market

*the possibility of an increase in the garbage bag prices from $2.50 to $3.00 and investigating the costs associated with Chelsea launching its own commercial trash service.

“The ever improving quality of life in this city, it’s not an accident,” said Council Member Cheri Albertson. “It’s due to an excellent city manager who knows how to pick excellent staff.”

The council and staff are expected to address some of these issues during upcoming budget work sessions and meetings in the next few months. 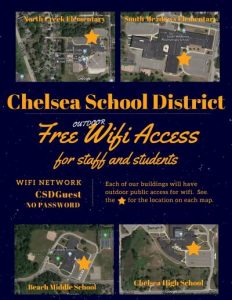