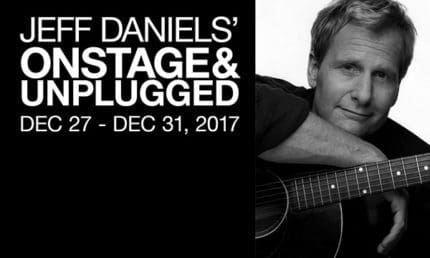 (Chelsea Update would like to thank Katie Hubbard for the information in this story.)

“The chance to see Jeff perform is always a thrill,” says Artistic Director Guy Sanville. “But the opportunity to be in a room with him, his guitar, and his music, is more than a rich and delightful entertainment experience. It is a backstage pass, a glimpse into the man, the artist and what he loves, pokes fun at and believes. As he told me once, ‘My songs are my journal.’”

Founder of the Purple Rose Theatre Company, Daniels will perform a family-oriented set of songs that create both hilarious and tender moments. The lineup features crowd favorites from his albums “Live at the Purple Rose,” “Grandfather’s Hat,” “Together Again,” “Keep It Right Here,” “Days Like These,” and his most recent album, “Simple Truths.”

In conjunction with his son Ben and the Ben Daniels Band, Jeff Daniels recently concluded an acoustic tour around 22 midwestern cities, 13 of which were in Michigan.

Last Wednesday, Nov. 22, Daniels premiered in the Netflix original series “Godless” alongside Jack O’Connell and Michelle Dockery. He will also star in Hulu’s 9/11-focused original series “Looming Tower,” set to release in early 2018. His recent stage and screen accolades include a 2016 Tony Award nomination for Best Leading Actor in “Blackbird” and three Emmy nominations, one of which he won for HBO’s “The Newsroom.”

Tickets for “Onstage and Unplugged” are now available for purchase by phone at 433-7673 and online at www.PurpleRoseTheatre.org.