(Chelsea Update would like to thank Jon Tulman, solid waste specialist, Washtenaw County Solid Waste Division for the information in this story.)

As you begin collecting stuff for the annual Washtenaw County Clean-Up Day, a few changes of note – beginning with a time change.

The event will take place at Chelsea High School beginning at 9 a.m. and ending at 1 p.m. All vehicles in line prior to that time will be served, but after that, they will be turned away.

In addition, the suggested donation has increased to $15 this year following five years of no increases.

The aerial photograph shows the layout to assist customers in loading their trailers and vehicles in reverse order of unloading.

And remember, the Chelsea Athletic Boosters will be collecting scrap metal.

Below is data from last year’s event: 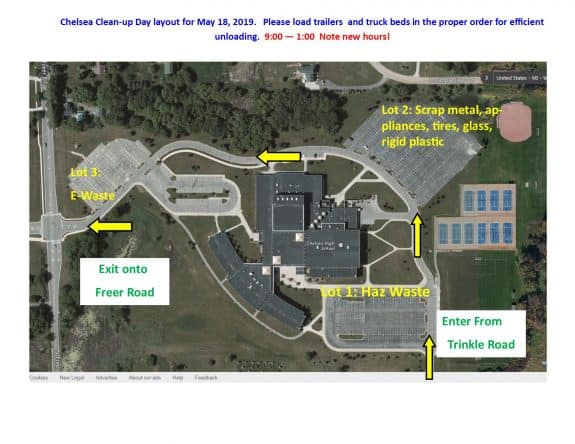