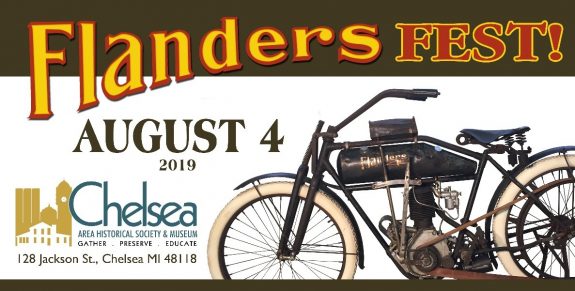 (Chelsea Update would like to thank Frank Hammer for the information in this story.)

On Aug. 4 the Chelsea Area Historical Society will be holding a Flanders Fest to honor Art Farley and Elliot Andrews as well as the 1911 Flanders CAHS bought and now have running.

Join historical society members for the 1st Annual Flanders Fest or Farley Flanders Fest as we remember our friends Farley and Andrews and the return of Chelsea’s 1911 Flanders.

A Memorial Ride starts at 10 and the Flanders Fest itself starts at noon.

Food and drinks will be available and all activities will be based from the historic Chelsea Train Depot & Historical Museum at 125 & 128 Jackson St.

Designated parking will be available for vintage bikes.

Andrews found the bike in Southern California and let Frank Hammer know about it. The bike was built in Chelsea and the test track used to be behind the Clock Tower building.

Hammer thought is would be a great tribute to Farley and arranged the money for the bike, $20,000 to buy it, almost $1,000 to ship it and about $9,000 to get it running, which Elliot kept meticulous records.

This is a fundraiser for the Historical Society and is planned to aid in protecting the Flanders since there are perhaps 20 Flanders in existence today.

1 thought on “Save the date: Aug. 4 first Flanders Fest”