For starters, it was parked in the first spot on Middle Street — right behind the blockade that separated a few hundred classic cars from Main Street.

Then there was the car’s rather unconventional color.

“I’ve always loved a Chevelle,” Cindy Lesser of Sylvan Township said. “My brother had one and I always wanted one.”

Then eight years ago, her husband, Mark Lesser, arrived home with, well, the beginnings of one.

The surprise was a ’71 Chevelle body. There was no engine or transmission. Or much else, she said. But she had faith that her husband could turn the shell of metal into her dream machine.

Her personal car builder also happens to be the owner of an auto supply business. Mark Lesser bought the Parts Peddler last year. Plus he has a long history of working on cars and RV’s, so he’s rather familiar with what goes where under the hood and on top of a chassis. 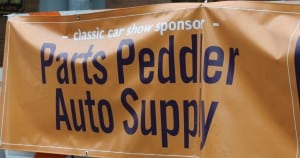 But turning that shell of an automobile into a street-legal vehicle was a seven-year process, which took place during countless hours inside the couple’s 1887 barn.

Today, the car has 500 miles on it, Cindy Lesser said, adding that the vehicle made its Chelsea Classic Car show debut last year.

This year, because her husband was one of the judges, the car was on display for the second time but it was only entered for exibition only.

An employee of the St. Louis Center, Cindy Lesser said she’s driven it to work a few times because the residents there love to see the unique car.

“Purple wouldn’t have been my color of choice, but at least she was willing to have black stripes painted on it,” her husband said.

But what really matters is that Cindy loves her car.

And so did a lot of other people who saw it at the show on Saturday, which the Parts Peddler sponsored for the first time.

“It was a perfect fit,” Mark Lesser said of the decision, adding that a number of the entries had parts from his business inside them.

“If I don’t have something in stock, I’m able to find those specialized parts,” Mark Lesser said.

In addition to owning the Parts Peddler, Mark Lesser is also a drag racer who travels all over the Midwest to race on the weekends.

So it’s only fair that Cindy Lesser has her own cool ride — a special car that brings back fond family memories and puts smiles on the faces of her friends, family and, just about everyone who sees it.