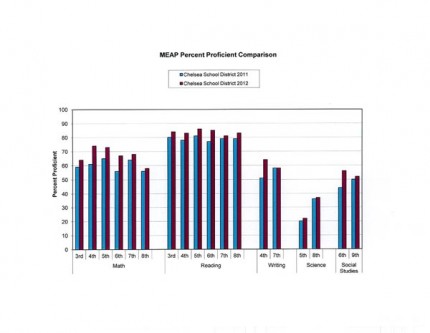 (Chelsea Update would like to thank Crystal Hayduk for covering this Board of Education meeting.)

Chelsea Schools Superintendent Andy Ingall reported that the Chelsea School District received their Michigan Education Assessment Program (MEAP) scores for 2012 at the Board of Education meeting on Monday, Feb. 11.

Students in third through eighth grades took the exams last October. Ninth grade students were tested in social studies only.

“We had some nice improvement over last year’s scores,” Ingall said. 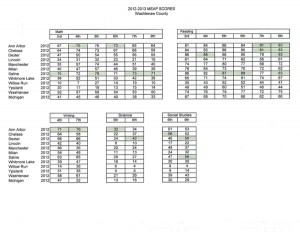 This is the second year of testing since the state raised the score that students must obtain to be considered proficient. And, the district showed improvement for the second year in a row in all areas except for seventh grade writing, which remained the same compared to 2011.

Ingall said that the district is working to improve writing scores through the use of the Lucy Calkins program.

Julie Deppner, executive director of instruction, said Chelsea’s students scored lowest on the science test, which is taken by fifth and eighth grade students. The lower scores in the area of science were reflected in the performance of students throughout the county and state.

However, Chelsea’s science scores improved from last year, while the state scores declined.

“We all have some work to do in this area,” she said.

An in-depth presentation of MEAP scores is planned for the March 11 school board meeting. 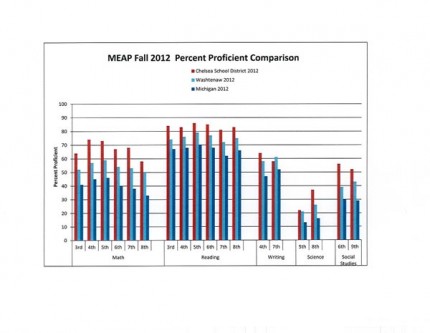