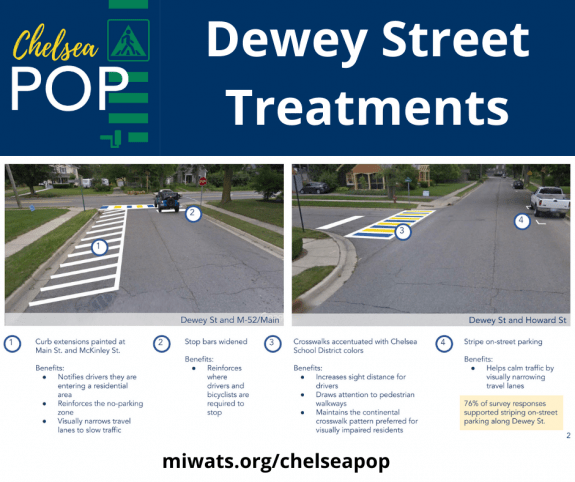 You may have noticed some new freshly painted and bright-colored street markings popping up on several streets in Chelsea.

These temporary street markings are part of “Chelsea POP” (a pop-up project) designed to draw attention as safety measures to designated areas on several streets and at several intersections that are frequently shared by cars, bikes and pedestrians.

Chelsea POP is a 30-day pop-up demonstration to “re-imagine” several streets in the city to encourage traffic calming and is the result of traffic studies and implemented through a partnership between the city, Washtenaw Area Transportation Study (WATS) and Saint Joseph Mercy Health System.

You will see these new temporary street markings on Freer Road, Railroad, McKinley and Dewey streets when the project is completed in September.

There will be bright green blocks of color with bike images and arrows painted in white called “sharrows” to designate shared roads.

White lines to delineate curb extensions, on-street parking and no parking zones can also be found. They are designed to visually narrow roads to slow traffic.

In these areas, when you reach stop signs, the pavement marking has been widened as a reminder to drivers and bicyclists that there is a stop sign ahead.

Crosswalks will be painted in “Chelsea blue and yellow” with alternating stripes of white to increase the sight distance to areas where people, bikes and cars converge. You’ll notice these temporary street markings at these spots: 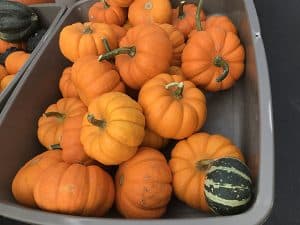