Four volunteers from the Huron River Watershed Council (HRWC) spent a recent Sunday morning as part of a special study group measuring water quality by testing its conductivity in a small section of Mill Creek in Sylvan Township.

The Mill Creek is the largest tributary to the Huron River, according to information from the HRWC.

Peggy Liggit, Dave and Sharon Brooks of Sylvan Township and Brett Harris of Dexter Township, were up and out of their homes early on Sept. 9, dressed to forge a 300-foot section of the creek between Ivey and Conway road.

Armed with GPS and a clipboard, sample containers and testing equipment, a camera and loppers (to cut back brambles), the four headed out to test the electrical resistance and temperature of the narrow stream during the special pilot study.

The day’s mission was to go upstream from a test they’d conducted previously on the health of the creek.

Conducting the first ½-mile section took them three hours to complete, Liggit said. And, depending on the terrain they encountered last Sunday heading the other way, they expected it to take less time.

The volunteers walked in the creek and stayed off neighbor’s property as much as possible. They stopped to take samples and record the data and GPS location. They also took photos of anything interesting they found.

Sometimes, they said, overgrowth forces them to take to higher ground.

Each member has a job. Liggit took photos and called off the GPS coordinates. Sharon Brooks recorded the data. David Brooks and Harris performed the tests.

The field work involves activities such as collecting data, assessing stream health, sampling water quality, and surveying for aquatic insects, they said, but what they were doing last Sunday was a special study.

So far, the group said, they “hadn’t found anything awful,” in the downstream area, and didn’t expect to find anything bad upstream, either.

They are part of several dozen teams who study two sites each throughout a designated area. Anyone can sign-up to become a volunteer and the Watershed Council will provide the training.

On Oct. 15, watershed volunteers will hold a “bug collector day” where they look for different insects in the water, which also helps them determine the quality of the area’s water and if there have been any changes. These take place three times a year, they said. 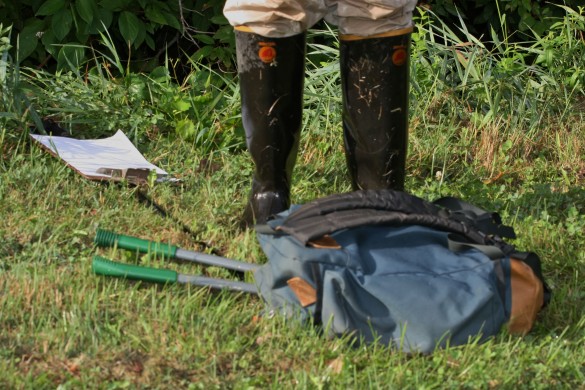 A look at the gear the volunteers bring with them while testing the waters.

May 19: Everyone Invited to Chelsea Chamber Annual Meeting at Robin Hills Farms